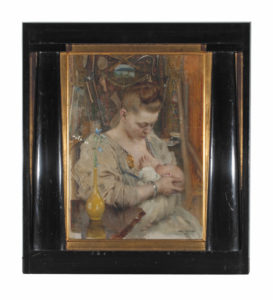 Axel and Mary Gallén’s life together began with their honeymoon to Kainuu in Northeast Finland and Dvina or White Sea Karelia in Russia. The trip lasted four months, after which they set up their home at Malmi near Helsinki.

The Malmi years were an important stage of Gallén’s career. The young couple’s honeymoon launched the period of Karelianism among Finnish artists, and at the time Gallén was working on his second version of the Aino Myth triptych, with his wife as his model.

The focus of the exhibition is Gallén’s painting Madonna, a jewel of the museum’s collections, depicting his wife Mary as a young mother. Shown in the background of Mary is an exceptional range of objects representing several different cultures in a staged display. They include Oriental artefacts bought in Paris and souvenirs of the Galléns’ honeymoon in Karelia.

In the exhibition, a new web application offers a closer and deeper look at the painting. Also on display together with the painting are original items collected on the Galléns’ travels and Axel Gallén’s paintings, drawings and sketches from around the same time. Gallen-Kallela’s pastime of collecting is reflected by the objects depicted in the painting and the exhibition’s small section on japonism.

Not all the items shown in the painting, however, have survived. The bracelet, which was dear to Mary, who had received it as a wedding present from her husband, sank to the bottom of nearby Laajalahti Bay. But take a look through the floor of the gallery in Tarvaspää. A new experience of augmented reality tells the story of the bracelet