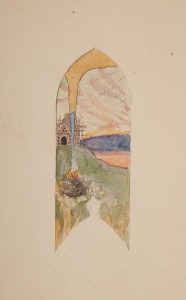 The Jusélius Mausoleum is the funerary chapel of a young girl in the Käppärä cemetery in Pori, West Finland. It was built by the businessman F. A. Jusélius in memory of his daughter Sigrid, who died at the age of 11. Jusélius commissioned the frescoes of the mausoleum from Akseli Gallen-Kallela and Pekka Halonen.

A funerary chapel for a child was a personal theme for Gallen-Kallela, who had also lost his first-born daughter, Marjatta. He devoted himself to the project, with the aim of “depicting the slow winding passage of our people along the ridge of life to the embrace of Tuonela, the realm of the dead”. The frescoes of the Jusélius mausoleum became a Finnish interpretation of European danse macabre themes.

The frescoes of the mausoleum were a major undertaking that took three years (1901–1903) to complete. It became the artistic interim statement of Gallen-Kallela’s career. Through the visual programme of the frescoes, he presented his view of the mission of the artist to seek the truth in exploring issues of life and death.

The Gallen-Kallela Museum displays the large body of sketches and studies for the frescoes in two exhibitions during Akseli Gallen-Kallela’s 150th anniversary year. The themes of On the Summit of Life are spring, youth, maturity and the transience of all things. The second stage, in the autumn, will address the themes of laying waste, destruction and the legendary River of Tuonela, the realm of the dead.