The mystery and transience of life mark the exhibition Devastation, Destruction and by the River of Tuonela.

During the 150th anniversary year of the birth of Akseli Gallen-Kallela, the museum is staging two exhibitions of his sketches and studies for the frescoes of the Jusélius Mausoleum. A number of these works have not been previously shown to the public.

The Jusélius Mausoleum in the Käppärä Cemetery in Pori is the burial chapel of a young girl. It was built by the businessman F. A. Jusélius in memory of his daughter Sigrid, who died at the age of eleven. Jusélius commissioned the frescoes of the mausoleum from Akseli Gallen-Kallela. While the death of his child was an arresting blow to the businessman, this was also personal theme for the artist himself, who had lost his first-born daughter Marjatta a few years earlier. In the frescoes, addressing one’s own grief is entwined with more general considerations of life and death.

In their depictions of the span of life and ephemerality of all things, the frescoes of the Jusélius mausoleum find a connection with the visual tradition of the danse macabre – the dance of death. In the works on display, both man and nature encounter death and desolation . Death is presented as part of the mystery of life and the cycle of nature. It is the artist’s mission to serve as a wandering seeker of truth between the hereafter and the living world. The sombre themes also make it possible to address painful emotions. 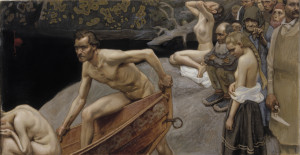 As if by an ironic twist of fate, the frescoes also met with destruction. Only a year after were painted they began to show signs of deterioration and they were finally destroyed in a fire in 1931. Death thus won over matter, but the spirit of the frescoes is still to be seen in their sketches and studies.