Black Swan and Other Strange Sights 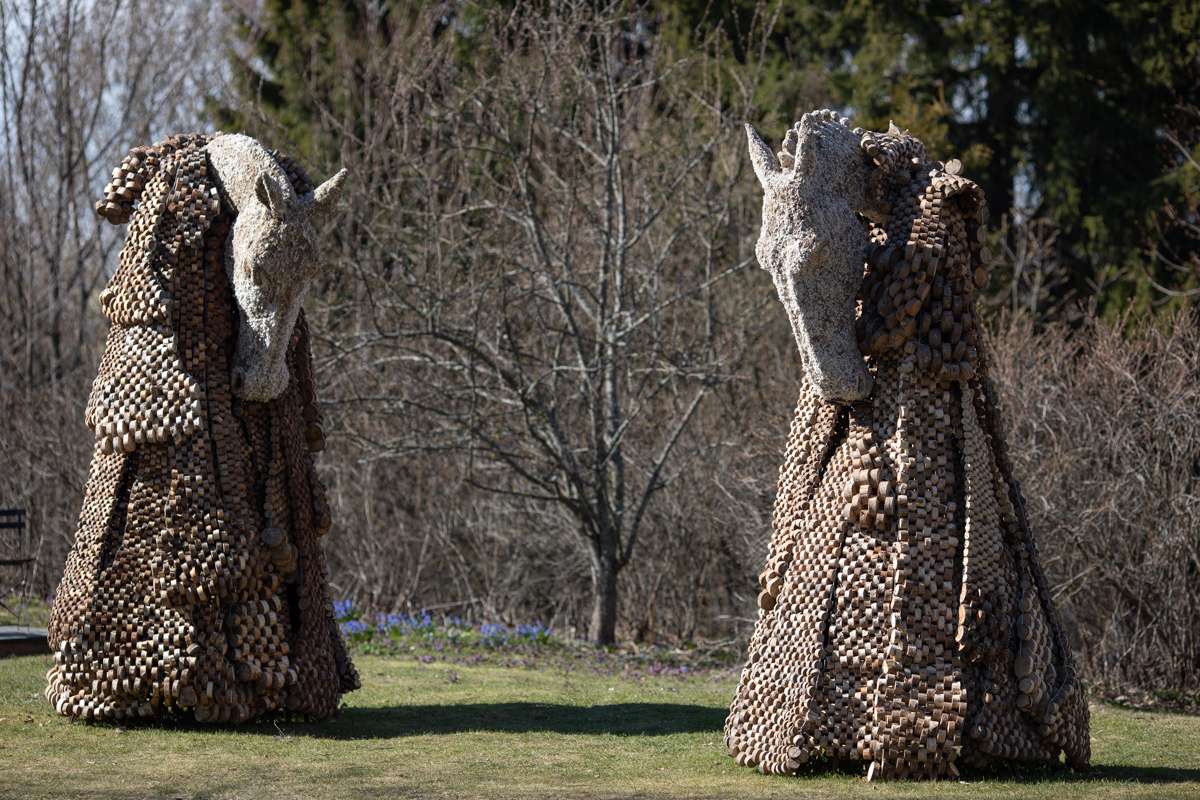 Situated in the yard area of Tarvaspää, Black Swan is an exhibition marking Jenni Tieaho’s twentieth anniversary as a professional artist. It consists of eight works made by her in recent years.

The pieces construct a dream-like world, taking as their motifs swan boats and hybrid human-animal figures. They are mostly made from natural materials, such as wood, tarred willow and parts of plants native to Finland.

Black Swan and the swan in the shape of a boat

The starting points of Tieaho’s works are in the mythology and mythical forest tales of Finland. For the artist, nature is like a nationality, her own language, yearning and partnership. The experience of nature permits her to form her own conception of time, boundaries, and good and evil.

The figure of the swan is associated with a great deal of symbolism and many beliefs and myths. In the ancient beliefs of the Baltic-Finnic peoples, the swan was thought to have been a human broken into becoming a bird. It was believed to have a contact to the different worlds, and it was not to be harmed. A swan swam in the black river of Tuonela in the Kalevala epic, and the hero Lemminkäinen loses his life when setting out to hunt it. Not all swans are white. Europeans saw black swans for the first time in Australia in 1697.

The ‘Black Swan’ is also concept created by the mathematician Nassim Nicholas Taleb to describe a highly unlikely event that cannot be predicted but will have a great effect.

In the exhibition, swan-boats built from willow withes into arching forms appear as the figures of the Black Swan.

Along with swans the exhibition includes horse figures made of tree branches and the autumn fluff of rosebay willowherb. The white material associates the meanings of purity and a bringer of good lick to the horseheads. Horses have a diverse symbolism. They are a metaphor of freedom and a bridge to the subconscious. As a mythical creature, the seahorse lives in all elements, on dry land, in water, and in fire and air. It symbolises fidelity and mystical power.

In Tieaho’s human-animal figures, people are given the senses of animals and animals the intellect of humans. The horse-human figures represents the complete merging of the cognisant and the instinctive.

Jenni Tieaho (born 1969) lives and works in Siuntio. She has held exhibitions regularly since 1997. Her works are included numerous collections, including the art collections of the Finnish state and the Saastamoinen Foundation. She has made the public artwork Jylhyys Hiidenhirvi  depicting a moose or European elk at Korkeasaari Zoo in Helsinki.

The Black Swan has received support from the Finnish Cultural Foundation ( The Eeva Rauhankallio Fund), Arts Promotion Centre Finland and the City of Espoo.