The sound piece of the exhibition is by Cornelius Jakhelln & Tvisyn.

The artists of this exhibition have in common myths, dream-like visions and images emerging from the subconscious along with a figurative manner of expression and technical skill. The symbolism of the turn of the nineteenth and twentieth centuries is juxtaposed with the ways in which contemporary artists address life and transitoriness.

What unites and separates us now, compared with a century ago?

Visions from the depths of history and the human mind

The new exhibition places contemporary works of art within the continuum of symbolism, carrying on in the spirit of our highly popular Inner Eye exhibition in the spring of 2019. It connects contemporary interest and research in symbolism and esotericism with the present day. The share roots of the artworks extend back to old German and Netherlandish art, such as Albrecht Dürer’s etchings, scientific illustrations, Rembrandt’s mysterious chiaroscuro, Goya’s Disasters of War and the tense moods of horror films.

Both The Slain Lemminkäinen (1896) by Akseli Gallen-Kallela and Sverre Malling’s Snowblind (2010) depicting a rock n’ roll figure killed by an
overdose of drugs find a parallel with The Body of the Dead Christ in the Tomb (1520–1522) by Hans Holbein the Younger, but also appear to be
definite mirror images of one another.

The tradition of vanitas paintings and dances of death have lived on as major question of life from one work of art and century to another. The skeleton figure can be seen in various situations in the works of both Louis Moe and Hugo Simberg and the skull can be found on Axel Gallén’s worktable in Paris and in the hand of a Bandidos character in Jarmo Mäkilä’s painting.

There is a mysterious mood to Odd Nerdrum’s paintings with their Rembrandtesque chiaroscuro. Fleshy figures in arrested landscapes move about in the interstices of the real and the unreal.

Questions of time and eternity

Art of the turn of the 19th and 20th centuries turned its gaze to inner worlds. Industrialisation began to reveal its negative aspects and artists yearned for spiritual values and authenticity. In our present era, there is the ever-present threat of an environmental catastrophe. On the other hand, threats may also come from within, from the subliminal and the subconscious. Familiar things become strange, rejected memories tease the individual on the borderlines of the mind and the self vacillates.

Art and its experience are always in a relationship with their period, its imagery and discourses. At the same time, questions regarded as timeless are the basic issues of art. Around the turn of the 19th and 20th centuries, art was a means for dealing with and attaining the esoteric, the sacred, the afterlife or the things falling in between the different worlds. Even today, art can serve as a way of talking about what is hard to grasp with words.

An article by Juha-Heikki Tihinen PhD on the heritage of symbolism and Nordic art noir will be published in connection with the exhibition.
Noir and Plus Noir

The Embassy of Norway in Helsinki has kindly supported the exhibition. 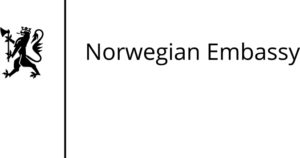