Can art preserve and restore biodiversity? 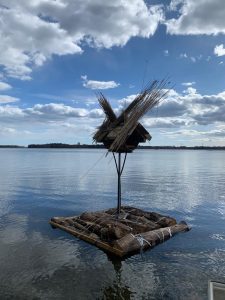 Lauri Isola’s bird and animal nests and resting places complement the already existing natural habitats in Tarvaspää area. They draw our focus to surrounding nature and ask questions about the future: what species we can hear and see at Tarvaspää in future?

I got the idea for my environmental exhibition Sotkan paluu from the fascinating idea about Sotka (old Finnish name for goldeneye, Bucephala clangula) as the creator of the world. I have been hiking around Laajalahti shores and groves for years and following the birds while working at the Gallen-Kallela Museum. This is how the idea started evolving to an exhibition based on traditional building techniques and Finnish folklore.

The Finnish national epic Kalevala has a story about Sotka as a mythical creator of the world who lays seven eggs on the knee of the mother of the water, Ilmatar. One of them is made up from iron and from that egg the world of Kalevala, the land of heroes is born. This all sounds so fascinating to me. Thus, the time and day are created, and entire world that is sometimes referred as Päivölä (wordplay of the Finnish word for day). Soon follows the creation of the heroes of Kalevala: Väinämöinen, and Kullervo, who will later lose his family.

One goal for the exhibition is to increase the biodiversity of the area because modern forestry is often too effective. There is not enough deadwood and other that kind of miniature environments left in forests for birds. It decreases the number of natural habitats of the birds and animals and they become homeless and without enough safe nesting places they eventually will end up without family like Kullervo in Kalevala.

The exhibitions name Sotkan paluu (The Return of the Goldeneye) comes from the old Finnish word for common goldeneye. I consider the Goldeneye to be the national bird of Finland, because it has always been habitant of this area and exists here in large numbers. For Finnish people, the return of the goldeneye is a sign of the spring and new beginnings. Early Finns were maybe fascinated by the swish sound it’s wings make when its about to fly and it’s elaborate and playful courtship rituals.

Isola’s environmental exhibition Sotkan paluu at the Gallen-Kallela Museum Garden and shores of Laajalahti around the museum during the summer 2022.

Taike and the City of Espoo have supported Lauri Isola and Sotkan paluu exhibition with a grand.