This exhibition presents Tarvaspää, Akseli Gallen-Kallela’s castle-like studio and residence, and its stages of design and construction, and renovation in the late 1920s. The ‘crenelated castle’ of Tarvaspää was the artist’s uncompleted dream. It was meant to be a total work of art like its predecessor, Kalela, and to be bequeathed to posterity for displaying the works of the man who created it. ‘I’m not building for ourselves, but for the next 500 years’, noted Gallen-Kallela when speaking of Tarvaspää.

Akseli Gallen-Kallela’s first studio and home, Kalela, was built at Ruovesi in 1895. It was of timber and the design was inspired by the vernacular architectural heritage of East Karelia. Its differences with regard to typical Karelian houses, however, were obvious, as the studio was fitted with a high roof and large windows. While living at Kalela, the artist had noticed that wood as a material will not last for future generations. Water seeped into the stone foundation and  basement of Kalela, rats thrived in the damp and the timber decayed, although the artist’s soul enjoyed the silence of the wilderness.

Gallen-Kallela chose to build his new studio in the yard area of the summer villa of Alberga Manor, owned by his mother-in-law. The site was on a small cape known as Linudd, with the villa, a gardener’s cabin and a gazebo that was demolished to make way for the new studio of reinforced concrete and white-plastered brick. Reinforced concrete was a new invention of the period that permitted the construction of supporting floors and pillars, and it began to be increasingly used.

Along with applying new building techniques, Gallen-Kallela carefully  considered the relationship of the studio with the overall setting of the yard area and its original buildings. The drawn plans from the early 1900s included workspaces and residential facilities for the artist’s pupils and an impressive winter conservatory. An observatory and a power plant running on wind energy on the roof and a wall structure joining the studio to the wooden villa were also left out of the final  plans. The main reason for the simplification of the plans was the family’s strained economic situation. The studio was built in its simplified form in 1911–1913. 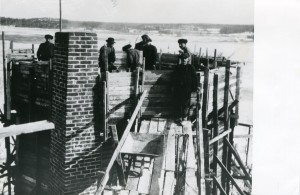 The family returned to Kalela in the autumn of 1915, when fortification works caused by the impending world war brought Russian soldiers all the way into the yard area of Tarvaspää. The Gallen-Kallelas returned to Tarvaspää in the late 1920s, when a kitchen, dwelling rooms and a modern bathroom with a bathtub and washbasin were constructed in the studio building. A waterspout resembling the head of a dragon was made for the tower. The construction and alteration work continued until the death of Akseli Gallen-Kallela. His widow, Mary Gallén, lived at Tarvaspää until 1939 and from time to time during the so-called interim peace of between the Soviet-Finnish Winter War of 1939–1940 and the Continuation War of 1941–1944. After the Continuation War, the house remained empty for over ten years.

The exhibition includes an augmented reality 3D model of the unrealised plans for Tarvaspää produced by students of the Metropolia University of Applied Sciences.

Read more about the project