Well-known works of art have turned into tattoos in the Gallen-Kallela Museum’s exhibition of photographs. 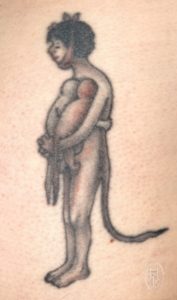 Over a period of around two years, media artist Harri Larjosto and the Gallen-Kallela Museum searched for people with tattoos based on works of art. The numbers of classic artworks living on human skin exceeded all expectations. Larjosto went on to photograph and interview one hundred people.

‘People have surprisingly serious reasons for bearing a picture, art on their skin, throughout their lives,’ says Larjosto.  People reveal their own moving, fascinating and amusing stories through this highly intimate exhibition and its book.

Artworks living on the skin provide a new perspective on the meaning of art in the present age.  Since the 1990s, tattoos have become increasingly popular, resulting in an outright boom as part of mainstream personal decoration. Many people with tattoos of artworks, however, seek to make a distinction from the mass. Images of art are felt to have a deeper meaning and value, being attached to history and culture. At the same time, tattooed works of art are transferred from museums and the pages of books to completely new settings and to be part of people’s lives.

Among the tattooed works, the most popular artist proved to be Akseli Gallen-Kallela with The Defence of the Sampo (1896) and other subjects from the Kalevala epic. For many people, the tattooing of classics of Finnish art was associated not only with the idea of their own roots but with an appropriation of national symbols: the shared cultural heritage must not wind up solely the property of nationalists.

The book Kuva ihollani (The Picture on my Skin, in Finnish) issued by Maahenki publishers will appear in connection with the exhibition.

This exhibition is part of the official programme of the centenary of Finnish independence.

The Kone Foundation has provided support for Harri Larjosto’s work.
In association with:  Epson Suomi